I caught up with the Singer-Songwriter and Producer to discuss his new single 'Shadows'. The song explores reflection on his struggles artistically, over a clean minimalistic, percussion driven pop track.

We discuss the inspiration for the track. Ken recalls the struggle of sitting down to create music, without the noise and influence of what would appeal to radio, playlists and how to appease a mass audience as opposed to true artistic expression.

"The core of the song is about disappointment. It's about the moment where you realise you've been letting yourself down because you've been struggling not only to please other people but you've not been expressing yourself and been honest with yourself.

Every time I sat down at the computer to start something I was always thinking, is this gonna be easy for people to get? Is it going to be remixable? Is it gonna be radio friendly? and in doing that I realised that I really let myself down. I lost the point of music, which is to express how you feel as an artist and you're unique perspective. It's about dealing with the acceptance that it was of your doing."

For artist's this is a mentality that you put on yourself, its impossible to navigate the field of artistry without looking around at your peers, questioning what you are doing wrong. The lyrics

reflect on just that. Every artist wants to have success, to be able to achieve that questioning your choices and yourself can be crippling to overcome, its always there and unfortunately always in your ears, whether it be through the radio or conversations about music. He envisions a space where music runs together.

"I'm a Mixed Black-American and I want to do pop music. I don't mean pop as in popular, I mean pop as in a music-style that is white-artist associated. So that we can get to a place where people can say in their head, its okay that there's a black male artist not doing R&B or Hip-hop, but actually doing stuff like Shawn Mendes, Troy Sivan or Tove Lo."

Prior to 'Shadows' he had released the single 'Your Time' under the moniker Xay Xo. He explains the importance of this track,

"It was a Hail Mary for me. I was going through a stomach infection that I didn't know about until after I'd recorded it. I thought that I wasn't going to sing again and so I recorded 'Your Time' almost as a goodbye. Then after that, the doctors were able to find out what was wrong and I came back to being healthy. But I never really came back to completely expressing myself with music. I'd gotten kind of obsessed with the idea of pleasing. Pleasing everyone, pleasing the people around me that I looked up to, trying to please convince people who had no care about what I did. But you can't keep any of that at the forefront and successfully express yourself.

I'd never expected to have to change my original name which I had for about 8/9 years, which was Hero. [Laughing] Then, this guy from Canada was using the exact same name and he's (rom a similar ethnic background and making a similar genre of music. He got published in America with the show Insecure. After that I thought, I can't use this name anymore realistically. So I made a list of 70 names and from that became Xay Xo."

He recall's a moment at his grandmother's house in Denver, frustratingly trying to get Alexa to play his music for her. Undoubtedly it was too hard to say with the inclusion of the 'X's.

Last year he started Go-go dancing as a way of making money, after his job as an electronic music teacher wasn't giving him the financial support he needed. He had studied ballet 15 years before releasing music, explaining his love for dancing.

"It's fun to dance in general but, I would rather not be doing it. It was the quickest solution to my then financial problems. I managed to establish myself pretty quickly as being punctual, a good dancer and being professional. When I started doing that I went by my real name but it was too long, no one could understand it and people would fuck it up. [He jokes] Something sonically about fucking up my name really hurts my ears haha.

I was trying to find another name for dancing and it ended up being Ken, because it means handsome. That in a Go-go arena is who I'm meant to be. Someone visually stimulating, so that was kind of my way of playing on the crowd. That took off and so many people started meeting me as Ken. More people ended up knowing me as Ken than as Xay Xo. I added XY because that's the chromosome for male.

That's something I've always wanted to be, both inside and out. Something I always strive for is beauty, vocally, musically, visually, mentally, and emotionally beautiful.

Gogo Dancing is me amplifying a part of myself for the job. For my music, I'm a more private person so I feel there's kind of a need for a forth wall. I grew up in theatre so i always had that fourth wall between me and the audience." 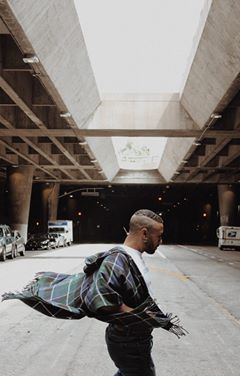 Identity is key to understanding your own artistry. You have to be totally honest with what it is you are going to portray through your music. This honesty is presented throughout the track and it'd dark yet introspective lyrics.

As the track builds and he asks 'How do you move through the shadows?' , the heavy synths are joined by a manipulated violin sound that sounds haunted yet close, mimicking the emotion felt in the lyrics. The overall structure of the song seems reversed almost, leading to a climax of just this sound a simple kick and a bass synth.

"That sound is super simple, it's kind of a stylistic thing of mine to use a manipulated sample, beyond the point of immediate recognition. You can hear that it has a part of itself still there. I used a sample from the apple library, but instead of using the entire string quartet I used the second violin part.

What I usually do when I'm writing is I keep things on repeat. I keep testing the different combinations of the things I have [in the track]. I added that, but I went back, chopped, used a spreader, pitch shifted a couple of the notes in it to give it that different melody and also to make it feel a bit broken alongside its melodic tone."

As for future plans we discuss the larger project that 'Shadows' is a part of. He's planning to release 3 EP's. Working backwards, he had conceptualised and begun working on two EP's first, 'Romanticism' and 'Realism', before the spread of Covid-19.

"I got sick, I lost my taste and smell, then I lost a lot of other senses and my body stopped functioning and so i lost the ability to kind of have any sort of pleasure. I wanted nothing more than to get out of my own body."

This feeling inspired the first instalment of the triple-release, 'Escapism'. Clearly relevant to the masses in this current pandemic climate.

Speaking on the video for the project - which he edited himself, with a sparse but dedicated crew, he confirms it features a lot of dancing, expressing the lyrics through dance - the only none verbal form of performance art. The importance of which is to express the sentiment in the lyrics - the idea of being confined and silenced artistically.

Cinematically it depicts Ken dancing through dark and lonely spaces in black and white, to purposefully express literally the 'shadows'. It's made to feel purposefully uncomfortable, in these spaces the line:

Rings through literally. "I thought I would be in a better place", doing better. The dancing counts as a form of expression as a means of dealing with the situation.

Finally, What song did Ken X Y wish he made?

"Julien by Carly Rae Jepsen. That song specifically is so perfect. It's such a perfect Pop song. it's so in line with my writing style and I'm just like damn? Why didn't I write this?"

The video for 'Shadows' will be out soon.